Well THAT was a heart pounding gut wrenching morning, and it had nothing to do with the four mile run I did up 2N19 with Alicia and Johnny. 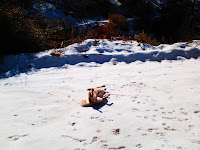 The plan was to run four miles total up the dirt road 2N19. 2N19 is the dirt road that kind of follows Green Valley Lake Road. I snow shoed this route with Alicia last year, wow running it was much quicker. I should have been back home in an hour and a half. Then Alicia asked me if I wanted to go check out the horses they are taking care of right now over at Rim Wood Ranch. For those not in the know, Rim Wood Ranch is like the Beverly Hills of the mountain community; its real nice.
So we do our run in a little mud and a little snow at the top, that Lucy had an awesome time making snow angels in (Please see pictures) and also body slamming Buddy their other dog. Then on the way back down the trail Johnny told me a delightful tale about some angry bitch in a black Subaru car/ truck who had been flipping off people (Who deserved it!) on the 330 the other night. Ha ha ha, guess when I told that Prius where to go Johnny was two cars behind me in his jeep. 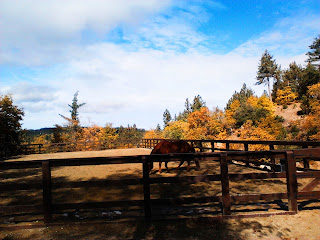 We finished up the run in about an hour, then drove over to Rim Wood to see this mansion and the miny mansion, I mean barn the horses are kept in. This property was unbelievable! I didn’t see the inside of the mansion, I just saw the gorgeous barn area (That is nicer then my house, no really it is!) and the guest cottage off to one side of the immaculately groomed property. The sad thing is, this guy is looking for two live in care takers and I would DIE for this job, it looks so awesome, but it also requires a man living there to do the man work, and as we all know I don’t DO man work.
Everything was going fine until this point. Johnny let horse number one out into the paddock, then when horse number two was being led out he got spooked by horse number one, and ran, dragging johnny, onto the rocky ledge at the side of the paddock. No problem, lets just back him out. Shit, this horse doesn’t GO into reverse. I ran back and got him some horsey treats, which he wanted no part of.
We were all looking at each other, like what do we do now? Crap. The ledge was really really narrow, and it was way to high to walk the scared horse, I could see him shaking, back down.
After an agonizing twenty minutes of what the fuck do we do, Alicia moved a bunch of loose boulders from around the ledge so hopefully he would not slip and Johnny very carefully walked him around the paddock cliff and back to safety. That was a heart pounding way to end my work out!