When you spend as much time as I do in the kitchen coming up with the latest and greatest healthy recipes, kitchen toys are a must. I have spent a lot of time perfecting my kitchen, getting the right appliances like a good faucet (check out these kitchen faucets if you need a good one) or a quality oven and making sure I have everything the way I need it. But I’m never happy! Any time a new do-dad comes out to make my favorite recipes easier to make I am just thrilled. My life was forever changed when I bought my spiralizer. I vowed never to eat pasta again, preferring instead the veggie version; zucchini noodles. When I purchased my frozen desert maker I could not believe how easy it was to make homemade mango sorbet for my boyfriend! So much healthier and fresh than the mass-produced crap they sell at Von’s! For more inspiration when searching for new kitchen gadgets always check out some reviews first. One place to start is Product Reviews at ProductExpert.in for some guidance.

My favorite of all my kitchen contraptions is my Nutribullet though. I have a real love affair going on with my Nutribullet. I don’t care if WordPress does not think Nutribullet is a real word. I have been crazy about the Nutribullet invention for five years now and I use this baby to make everything from Cashew Milk Smoothies to homemade coconut beverage, to soups to even homemade cat food. It’s hard to narrow down among all my crazy kitchen equipment what I can’t live without and what is my favorite kitchen gadget but my Nutribullet is really definitely my favorite. I bought a car plug in adapter just so I can take this thing camping with me! I mean, that right there is commitment!

Thanks to Amazon every time I decide I need to make a zucchini into noodles or smoke a random meat or make homemade gluten free tortillas, I can do all these things in two days or less!

Last week I decided that I had to buy another new kitchen gadget after I tried to scrape the meat out of a coconut for the first time and I was on the floor an hour later, practically in tears and hugging a bottle of wine.

I needed to buy a coconut scraper. At least that is what my boyfriend told me as he tried to pry the chardonnay out of my fingers. I would have fought him off with my coconut scraper knife but I broke my knife trying to milk a coconut. Thank you Amazon for saving my sanity and making it so easy every time I find a new kitchen gadget I so badly need. If you’re looking for some great kitchen appliances and gadgets, you may want to check out Nella Food Equipment.

I bought my first Nutribullet at Kohls about five years ago and I literally used it until the motor blew up last year. The last straw was trying to make my own nut butter with Brazil nuts, walnuts and hazelnuts. It was delicious but also the death of my favorite kitchen toy, my Nutribullet. I do everything with my Nutribullet from grinding coffee beans to breaking down cinnamon sticks and white cardamom pods for my homemade curry powder. I literally drag this thing on every vacation we go on even if it means I have to check luggage. Once you have used a Nutribullet compared to a blender or food processor you can never, ever go back. If you buy yourself any new kitchen toys in 2017, it should be a Nutribullet.

“Mah koot marrow” which has to be Thai for “Oh thank God, I don’t have to scrape a coconut by hand anymore” I made the mistake of making my own coconut milk and coconut beverage from scratch and now I’m hooked. I can never go back to store bought. I thought that scraping coconuts was the worst thing ever until my boyfriend pointed out I did not have the correct tool. A coconut scraper makes it beyond simple to get the meat out of a coconut.

I have two words for you. Zucchini noodles. They will change your life! Our neighbor invites us to spaghetti dinner every Thursday night and every Thursday night I bring my own Zucchini noodles, because I am That Neighbor. Once you make your own noodles from so many different veggies with a spiralizer how can you possibly go back to icky carb and gluten filled pasta. No thanks. I’ll just be That Neighbor.

Is there anything more tasty than a fresh tortilla? Nope. I think not. Especially when you make them yourself in your home kitchen. Sometimes I even grind my own masa, lard and spinach together and I make healthy tortilla.

And some times I use coconut instead of the lard because White People Make Tortillas too.

Okay, yes sometimes tortillas are full of lard, but lets face it, you can’t eat healthy ALL the time! Sometimes I fry these in coconut oil and add spinach in them! Full of iron! Popeye would love these! Hola Popeye!

I for one love a homemade Pumpkin Coconut Latté in the autumn months. Making my own lattés at home are super easy now that I have a milk frother! These babies are cheap on Amazon to too!

I hemmed and hawed over my smoker purchase as it was not a cheap appliance.

Than I thought of homemade smoked salmon.

Than I dreamt of smoked pork

There was no denying my needs. I needed a Smoked Chicken BBQ Pizza. It had to happen and Amazon made it so easy! Now we tempt our neighborhood a few times a month with the most amazing smoked meat smells.

My sushi bazooka has to be one of the greatest Christmas presents I have ever given to my boyfriend. Who does not love the gift of sushi? Fishy freshness is the real gift that just keeps on giving! This fantastic kitchen toy, the sushi bazooka makes sushi making so darn easy! If you love sushi, you should invest in one of these bad boys today!

My boyfriend loves sorbet and I love buying it for him! The problem with store bought sorbet is it has added sugars and always some kinds of added preservatives. It’s just so much more natural to make your own! I literally just throw a few mangoes in this baby and I have a happy boyfriend! No artificial ingredients and that is just fantastic!

On Monday I decided to become vegan. Than on Wednesday I bought new kitchen toy:, a meat grinder. I know, I know. In suck at being vegan. For someone who loves to cook, a meat grinders is such a good time! Who does not love grinding organs! Seriously though, try my curry leave chicken liver sausage. Its out of this world good. 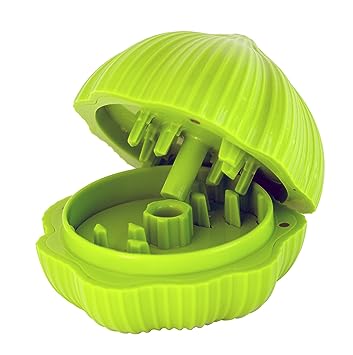 I leave you with this bad boy. Peeling garlic is a pain in the butt. This baby makes it easier and lately I can even find these guys in my local grocery store! Buy one today; You can thank me later! Now that I’ve got my garlic chopper, I am craving a contraption that chops all my veg for me…perhaps a vegetable chopper from chop your veggies is next on my list!

For the true foodies out there, all these do-dads are just so much fun to have on hand in the kitchen to try out so many great new recipes and healthy eating experiences! Thanks to these new kitchen toys 2017 is going to be such a easier year of cooking fun in my kitchen!